He’d been saying for several months how much he’d like to get into commercials or print work or television. Being a lifelong feedbag for the entertainment industry, I’d been resistant to his urges. I haven’t been prepared to throw him into that frenzy of foxes.

But he pressed the issue — which was part of a test, if I’m honest. I wanted to see how persistent he’d be. I wanted to see if this was just another trend about which he was temporarily yet deeply curious.

So I made the call. I’d never forgive myself if I was the deterrent of his dreams. I called my friend and entertainment photographer Michael Cairns and set up the appointment to do a photo shoot. And then I stood back and watched. Seriously. I stepped out of “Melissa the controlling mom” and watched from a distance.

I know J, and I know about his charisma and charm and intellect and talents. But I’ve never been convinced that he’d do well in the industry because of his serious nature. I see all these animated children and, while I’m not one to shy away from expression, J has always been the kid who studies and analyzes every element of anything that crosses his path.

Kids point to their shadow and say, “Look at that!” J was the little boy who pointed to his shadow, tilted his neck Forrest Gump-style, and said, “How is that possible? It must be because the sun is behind me and …” You get the idea.

As part of another test, I wanted to see how J responded to the experience and Michael’s direction. Michael’s a master at making people feel incredibly comfortable, so I gave J no prompting about what to expect; I gave him no ideas about what I expected from him. I just let him do his thang.

And do his thang he did.

When the proofs were handed to me, I was given a wink and a warning: “Wait until you get to the last pages.” See, I was on a business call when Michael was taking the photos of J’s second look, so I had no idea what was happening. Sure, I saw his clothes — I picked them out, of course, but I didn’t watch the action.

As I flipped through the first few pages, I thought they were great, just what I’d anticipated.

And then: “the last pages.”

My jaw hit the floor. And then it didn’t stop flappin’ as I hooted and hollered and thanked God for giving me such a beautiful son. You’d have thought I had some sort of reverse Oedipus complex or something. These photos blew me away.

When we sat in the car, I looked at J and said, “You really impressed me today. You wanted something, had no experience, and were determined to make it happen. I am proud of you.”

He gave me his side grin and lowered right eyelid and said: “We’re going to be successful no matter what.”

Who knows if anything ever will happen for him in the entertainment industry as a result of these photos? What his dad and I do know is the truth in J’s statement to me. He will be successful no matter what. Already a quarterback, first baseman, gifted student and project leader, winner of art contests, piano major, lover of people and in a grade ahead at school, I’d say he’s well on his way to success. If only we all could be so resolute in pursuing the things we want.

Please allow me to introduce you to my prince. And, thank you, Michael Cairns. 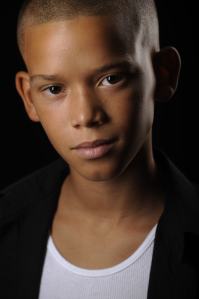 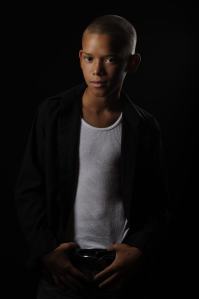 7 thoughts on “The Pursuit of Resolute(ness)”

My goal is to coach and inspire you toward a career in the performing arts by sharing stories of entertainment professionals from around the world.

Building on a successful career as a performing artist and now as a communications professional, I continue to discover we’re all connected and should draw out and upon one another’s gifts.